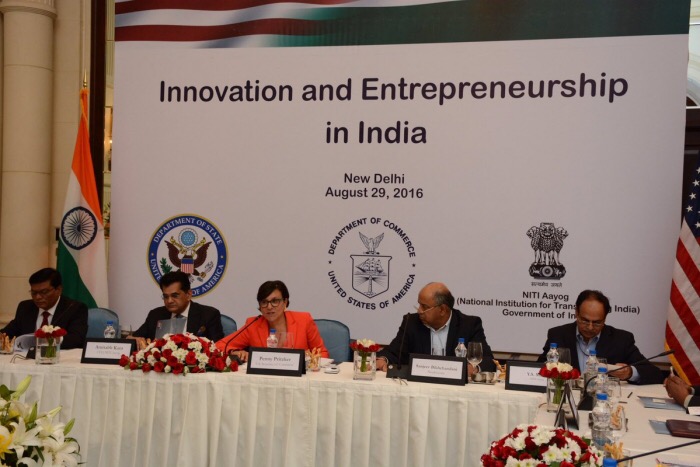 U.S. Secretary of Commerce Penny Pritzker highlighted the critical role entrepreneurship can play in deepening economic ties between the United States and India during remarks at this week’s U.S.-India Entrepreneurship Roundtable in New Delhi. The roundtable, which was held on the sidelines of the second annual U.S.-India Strategic and Commercial Dialogue (S&CD) brought together government and industry leaders to discuss expanding the entrepreneurial spirit in the global economy.

Secretary Pritzker, U.S. National Economic Council Director Jeff Zients, and Amitabh Kant, CEO of NITI Aayog, co-hosted the event that also featured officials from the U.S. Departments of Commerce and State, and 11 Indian entrepreneurs, including the CEOs from Zoomcar, Shoclues, and Practo Technologies.

The Entrepreneurship Roundtable offered the chance for Secretary Pritzker to connect with entrepreneurs in India, hearing about the experiences and challenges they have faced with starting companies in India. Secretary Pritzker discussed the importance of creating a culture and legal structure that is conducive to innovation, which is critical to economic growth. Additionally, innovators had the opportunity to exchange ideas and provide insight on the climate for starting business in India.

Secretary Pritzker heard from entrepreneurs like Chetna Vijay Sinha, Chairperson of Mann Deshi Bank and founder of, Mann Deshi Foundation. Mann Deshi Bank provides loans, savings plans, pensions, and insurance to women in rural villages across India and the Mann Deshi Foundation is focused on establishing equal rights for women in rural India. She also heard from Sanjeev Bikhchandani, founder of Naukri.com. Naukri.com started as a database of resume, jobs and recruitment consultants where jobseekers and hiring managers could meet, AND the services went commercial in 1997.

In reviewing the current state of entrepreneurship and business development in the United States, Secretary Pritzker outlined the success of the Presidential Ambassadors for Global Entrepreneurship (PAGE) program, a first-of-its-kind collaboration between government officials and American entrepreneurs to provide them with the assets they need to thrive.

Secretary Pritzker closed her remarks with a look ahead to the 2017 Global Entrepreneurship Summit, which will be held in India. At the Summit, the world will be looking to leading economies, like those of the United States and India, to supply the next wave of innovation. She highlighted the importance of engaging key partners in efforts to grow the innovation ecosystem in India by identifying investors, supporters, and fellow entrepreneurs who need to be involved in order to make the Summit a success.