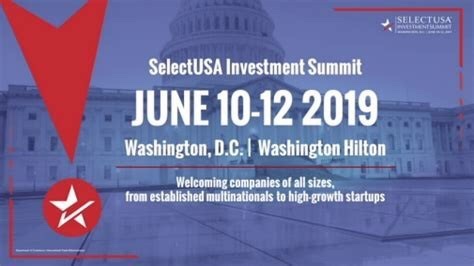 Kudlow will deliver lunch remarks on June 11. Trump will speak on a workforce development panel on June 12.

“This Administration’s policies are further solidifying the United States as the premier location to do business,” Kudlow said. “The SelectUSA Investment Summit is an excellent platform to tell a global audience that investing in the United States is a critical step to doing business in the modern global economy, and I am excited to be a part of it.”

“While President’s pro-growth policies have attracted the attention of business leaders and entrepreneurs around the world, it’s our incomparable workforce that often seals the deal for new investment projects. I’m proud to join Secretary Ross at this year’s SelectUSA Investment Summit to discuss the unparalleled opportunity to invest in our roaring economy and how we are working to ensure our workforce is equipped with the skills and talents for the jobs of today and tomorrow,” Trump said.

Secretary Ross and Ivanka Trump are co-chairs of the National Council for the American Worker and the American Workforce Policy Advisory Board which seeks to bring more Americans off the sidelines and into the workforce by improving jobs data transparency, skills-based hiring and training, advancing opportunities for lifelong learning, and promoting multiple pathways to family-sustaining careers.

Ross and Trump will also join Investment Summit business attendees as they sign the Pledge to America’s Workers. The Pledge is a commitment to expand programs that educate, train, and reskill American workers from high school to near retirement. Since President Trump signed the Executive Order, more than 200 companies and organizations have signed the Pledge, contributing to over 8.9 million new education and training opportunities for American students and workers over the next five years.

The annual Investment Summit will be held June 10-12 at the Washington Hilton in Washington, D.C. Participants from the previous five Summits have announced more than $103.6 billion in greenfield investment projects in the United States within five years of attending. These projects directly support more than 167,000 U.S. jobs.

Registration is open and already includes more than 2,800 attendees from over 70 international markets and 49 U.S. states and territories. Featured speakers include Secretary of the Treasury Steven Mnuchin, Secretary of Agriculture Sonny Perdue, Secretary of Housing and Urban Development Ben Carson, Secretary of Energy Rick Perry, governors from eight states, and senior executives from companies including Hitachi, Siemens, and Softbank.

The United States is home to more foreign direct investment (FDI) than any other country in the world, with a total stock of more than $4 trillion of investment according to the latest data. FDI supports nearly 14 million American jobs, and is responsible for $370 billion in U.S. goods exports.