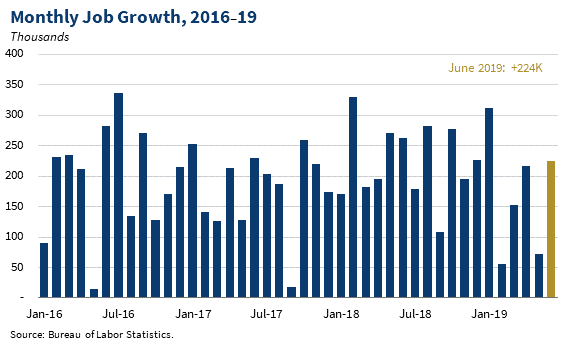 The White House issued a press release said, The United States economy continues to flourish, according to the June Employment Situation Report released today by the Bureau of Labor Statistics (BLS). Total nonfarm payroll employment in June rose by 224,000 jobs, far exceeding market expectations (162,000). With July marking the longest economic expansion on record, it is a testament to the strength of the Administration’s economic policies that the economy continues to generate monthly job gains of this magnitude.

Including revisions for the months of April and May, the average pace of job growth has been a vigorous 192,000 jobs per month over the past year. In total, the economy has added more than 6 million jobs since President Donald J. Trump was elected. The June jobs report also reflects a rebound in job growth, suggesting that May’s revised outcome (+72K) was not a trend (see figure).

The June report indicates that robust jobs growth is coupled with consistently strong wage growth. Nominal average hourly earnings rose by 3.1 percent over the past 12 months, marking the 11th straight month that that year-over-year wage gains were at or above 3 percent. Prior to 2018, nominal average hourly wage gains had not reached 3 percent since April 2009.

A prosperous economy stimulated by pro-worker policies is pulling workers off the sidelines. Despite the continued low unemployment rates over the past year, some workers may still be on the sidelines, a situation economists refer to as “labor slack.” Because labor market slack still exists, employment can continue to rise and the economy can continue to grow as workers reenter the labor force. In the second quarter of 2019, 73.7 percent of workers entering employment came from out of the labor force rather than from unemployment.

The June employment data portray an American economy that is humming along briskly, with a continued low unemployment rate, historic trends in job growth, and rising wages.